After more than 16 years of successful operations since its launch in 2002, RHESSI was decommissioned on 16 August, 2018. Because of communications difficulties, the detectors were not turned back on following the sixth anneal, which started on April 12, 2018. Thus, X-ray observations ended on April 11 at 01:50 UT and the last flare in the RHESSI catalog is a B5 on March 3, 2018. Telemetry transmissions continued after that time with data, including aspect information, available through July 20, 2018.

For the next few years, RHESSI data products will continue to be accessible on the usual servers. In the future, the archive will be available through the Solar Data Analysis Center (SDAC).

RHESSI covered more than a complete 11-year solar cycle, recording over 120,000 X-ray events, 42 with gamma-ray emission above 300 keV, and 27 with gamma-ray line emission. During that time, RHESSI was the only observatory that could provide imaging spectroscopy of the energetic electrons that carry such a large part of the energy released in flares. 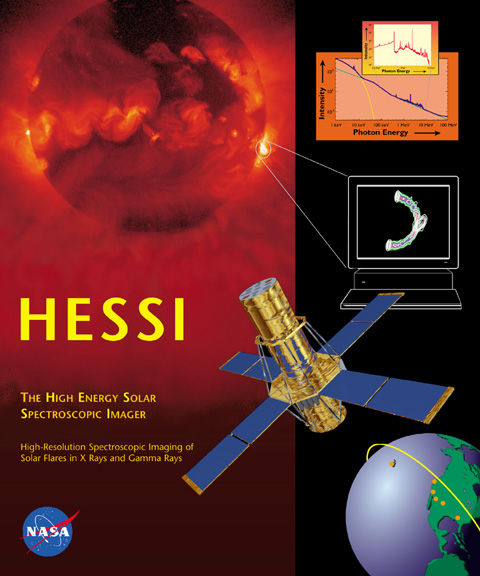 
RHESSI's primary mission is to explore the basic physics of particle acceleration and explosive energy release in solar flares.  This is achieved through imaging spectroscopy in X-rays and gamma-rays with fine angular and energy resolution to reveal the locations and spectra of the accelerated electrons and ions and of the hottest plasma.

Solar flares and their associated coronal mass ejections are of great scientific interest since they are so little understood. They present severe challenges to explain how the energy equivalent of billions of megatons of TNT is released in the solar atmosphere on time scales of minutes, and how so many electrons, protons and heavier ions are accelerated to such high energies. These super-energetic solar eruptive events are the most extreme drivers of space weather and present significant dangers in space and on Earth.

What is a solar flare?

How does RHESSI work?

What are the scientific objectives?

How does RHESSI make images?